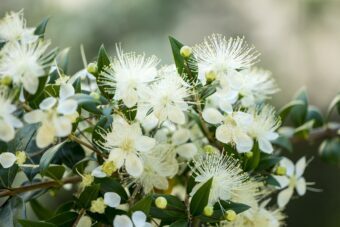 In this article, we will discover how to grow Myrtus in containers, a popular English shrub. Myrtus, which has the common name of Myrtle, is a flowering shrub that belongs to its own family of Myrtaceae, It has been grown in English gardens since the 16th century, where sprays of blooms have been used in Victorian bride’s bouquet.

The genus itself was described for the first time by the famous Swedish Botanist of Linnaeus in 1753. Myrtus is a funny old genus, where at one time or other, 600 species have been proposed. The problem is that a lot of those species have been moved to other genera or turned out to be synonyms. This will have cleared up the confusion as today only three species are recognised. Myrtus communis is the native species to Mediterranean regions in southern Europe, Myrtus nivellei is native to North Africa and is the less common, Myrtus phyllireaefolia. Myrtus has been used as an edible crop and used to make drinks or food flavourings since the middle ages.

The common Myrtle is an evergreen shrub that grows up to 3m tall and has 3 to 5cm long, lance-like, fragrant, green leaves. These are used to make a fragrant essential oil. The star-like white flower is made up of five petals and sepals, and numerous stamens appear in summer to early autumn. The flowers are followed by round purple-black berries that contain several blue-black seeds. The flowers are also heavenly scented.

Myrtus nivellei is found in the Sahara desert and not readily found in UK gardens as it is not hardy enough.

Find out how to grow this shrub of Myrtus in containers in this article.

First, you will need to choose a container that is well-balanced with the shrub in question and will suit it. Whatever you choose make sure it has plenty of drainage holes at the bottom. To the container add a2cm layer of gravel to aid drainage even further. On top of this add multipurpose compost to within 5cm below the top rim.

Dig a hole in the centre of the container slightly bigger than the root ball it came in the original pot you bought it in. Drop the plant in so that the top of the root ball is at the same level as the top surface of the compost. Backfill with the growing media so that no gaps remain, using more compost if you find it to be necessary. Firm the plant in and water very well.

The plant needs to be grown in a sheltered and sunny spot, away from cold winds and harsh frosts. Myrtle is not fully hardy and can die in severe winters. You can risk it if you live in a mild area in the South of the UK but in Scotland, it is best to move it indoors under the protection of a greenhouse or cover it with thick, horticultural fleece against a south-facing wall.

You will need to water the plant regularly especially when it is young. It is best to water with rainwater when 5cm below the top surface of the compost feels dry to the touch. Water until it emerges from the drainage holes.

In early spring, it is advised to fertilise using a general-purpose, slow-release fertilizer to give enough nutrients to get it through the growing season.

Pruning is not necessary but you can prune out unwanted growth by cutting back hard in spring.

To propagate it is best to the semi-ripe cuttings in summer and place them on a heated propagator. You should allow it to grow on before hardening off and planting out in spring the following year.

The only species you are likely to find and the hardiest is Myrtus communis which grows up to 3m tall. It flowers from July to September where the scent can be enjoyed. You have several varieties that can be grown.

‘Tarantina’ only grows up to 1m high and is most suited for containers.

‘Tarantina Variegata’ is similar to Tarantina but has pale yellow leaves with green streaks.

‘Nana’ has small leaves and grows up to 1.5m high.

‘Compacta’ is a bit bigger growing up to 2.5m high.

‘Compacta Variegata’  is similar to Compacta but has variegated yellow to white leaves. For a true dwarf ‘Buxifolia’ grows less than 1m tall with small leaves.

In this article, we have discussed how to grow the historical shrub of Myrtus in containers. They are wonderful plants that have excellent flowers that are scented and look great growing in containers. They have been grown for more than two millennia and should be grown in containers but they are readily seen.

This is a shame as they are easy to grow and look after. I think they should be grown once more, so why not grow one today?

If you have any questions or comments that you wish to make on growing Myrtus in containers, please do so in the comment box below,