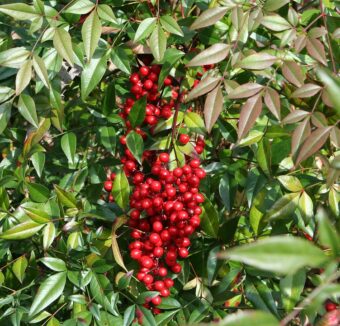 In this article, we will discuss how to grow the increasingly popular shrub of Nandina domestica in containers. Nandina is the only species of flowering plant that belong to the Berberidaceae (Barberry) family.

It is native to Eastern Africa from the Himalayas to Japan. The reason for its popularity is the colourful foliage it produces, which can be said to be unmatched in the shrub world. In spring new foliage emerges with a tinge of red that turns green as it matures. In autumn, this evergreen shrub will develop a flush of orange, so that it goes from red-tinged to green to a flush of orange in one growing season.

ITS LATIN NAME COMES FROM JAPAN

The Latin name Nandina comes from the Japanese word ‘Nantan’. Although it has the common name of sacred bamboo, it is not a bamboo at all but a member of the Berberis family. The upright stems that do not branch make it appear to be Bamboo-like. The leaves are often glossy and in cooler climates can be lost somewhat. The young leaves as mentioned previously are red whilst young before turning green in summer and orange-red in autumn before dropping off. The petiolate leaves are long, up to 1m long consisting of two or three pinnacle leaflets that are ovate or lanceolate.

Nandina flowers in June and July producing numerous panicles of white flowers that have male and female parts. The flowers are borne in conical clusters and appear well above the foliage. This is followed by large bright red berries that ripen in late autumn and exists throughout the winter. The berries are poisonous to the birds so they do not tend to eat them.

It is a plant that offers interest in terms of leaves’ colours and berries that last throughout winter.

Find out how to grow the shrub of Nandina in containers.

Nandina is an easy-to-grow shrub and requires low maintenance. First, choose a container that is large enough and will suit the shrub in question. Whatever you choose make sure it has plenty of drainage holes at the bottom. They are not fussy about what type of soil is used but it must be free-draining.

Fill the container to within 5cm below the top rim with a good quality multipurpose compost. Dig a hole at the centre of the container slightly bigger than the root ball it came in the original container. Drop the shrub on so that the top of the root ball is at the same level as the top surface of the compost in the container. Backfill with the growing media so that no gaps remain, using more compost if you find it necessary. Water well and firm the plant in. Add a thin layer of much or bark chippings around the plant to suppress weeds and conserve moisture.

Place your plant in a sunny but sheltered position away from cold winds and harsh frosts. After it is established will take drought well, so water frequently in the first growing season when the top surface of the compost feels dry to the touch. Otherwise, you will need to water when 5cm below the top surface of the compost feel dry to the touch. Water until it emerges from the drainage holes.

You can feed in early spring with a handful of slow-release, general-purpose fertilizer at the manufacturer’s recommended application rate to give a boost through the growing season.

Nandina does not need pruning but you can remove the flower heads once the berries are all gone. After a few years, some of the tallest stems can be cut back in early spring.

To propagate you need to take cuttings from semi-ripe stems in late summer. Place them in a heated propagator until they have rooted. You can plant them out sometime in the following year. Alternatively, you can plant any runners that form by cutting and replanting them.

Luckily the plants do not suffer from pests and diseases, so making them an ideal plant to have. The berries can be toxic to pets so place them where they cannot access them.

Nandina domestica is the only species you can find and has been described in great detail in the introduction. Recommend varieties include ‘Fire Power’ which has brilliant red/bronze leaves in autumn and ‘Obsessed’ which produces fiery red leaves in spring that turn green in summer before finally turning red again in autumn. ‘Magical Lemon and Lime’ has young leaves that are yellow/lime that turns green in summer. ‘Gulfstream’ has bronze young leaves that turn green in summer before turning a fiery red in autumn. Other varieties that are recommended include ‘Blush Pink’, ‘Twlight’, ‘Flirt’ and ‘Brightlight’.

In this article, we have discussed how to grow the delightful and colourful compact shrub of Nandina in containers. They produce colourful new leaves that turn green in summer before turning red in autumn again. Nandina flower in early summer before producing red berries that last well into winter. They are easy to grow, easy to care for and relatively pests and diseases free. No pruning is even required so why not grow one today?

If you have any questions or comments that you wish to make on growing Nandina in containers, please do so in the comment box below.