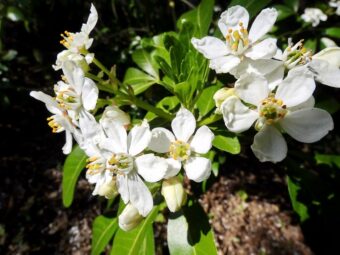 In this article, we will discuss how to grow Choiysa in containers to give a wonderful colourful leaf plant that has beautiful flowers.  The flowers tend to appear between late April to late May and are often numerous and delightfully scented. The flowers are not the only reason that the plant is grown for but for its beautiful, elegant coloured leaves.

The variety ‘Sundance’ has dark green leaves on mature growth but in spring new yellow-lime green leaves appear, giving a beautiful contrast between the young and old leaves, giving a stunning effect.

Choisya is also known as Mexican Orange blossom, as the names imply comes from South America, where they were introduced to Europe by Swiss horticulturist Jacques Denys Choisy. It is a hardy relative to the citrus and shares similarly aromatic leaves and wonderful sweet-scented, waxy, white flowers.

IT IS A PLANT THAT LIKES THE SUN

Choisya prefers to be grown in full sun but can tolerate a good degree of shade. It can take temperatures as low as minus 15 degrees Celsius, but this depends on what species is grown and where it is grown.

For a plant, it is not fussy about what soil it is grown in, but it will not do well if the soil is too acidic or too alkaline. As the leaves are leathery it will take short periods of drought, but in containers, this may be less so. A plant that does not require much in the way of nutrients, so will take neglect well and it does not need to be pruned much at all.

A plant that is generally pest-free, although young leaves can be devoured by slugs and snails, and rabbits can make a meal of your plant.

HOW TO PLANT CHOISYA IN CONTAINERS

Choisyas can be grown in containers although this means that they need extra care, especially so in winter. Container plants are more likely to be damaged by frosts than those grown in the ground.  It may be advised if a severe frost is forecast that you protect the plant by using thick, horticultural fleece and by placing the container closer to the home.

If it is really cold, it is recommended that you move your plant into a greenhouse or conservatory during the night before moving outdoors during the day.

When you plant a Choisya, you must consider the container size and the size the shrub grow to. I would recommend a half-size barrel, as this will support the plant roots and will also mean that you will need to water less. Although any Choiysa can be grown in containers, slower-growing varieties are preferred.  Varieties like Choiysa dewitteana are smaller and will require less pruning.

Plant the shrub in 70% by volume multipurpose compost mixed with 30% by volume horticultural grit to ensure the growing media is free-draining. When you plant make sure the shrub is planted firmly, as wind rock can damage roots. As ever it may need to be watered more frequently in heatwaves, where 3 to 4 times a week may not be uncommon.

In early spring, a slow-release fertilizer application will get it through the growing season. When you water it is better to water with rainwater rather than tap water, as this will benefit the plant in the long run. Do not neglect as the plant will wither if it is neglected.

You can use mulch or stones on top of the compost to conserve moisture and to reduce the need for watering.  It can be planted all year round, as long as there are no frost forecasts and the compost is not too wet.

There are two genera of Choisya that are commonly grown in the UK and are widely available.

The most common is Choisya ternata that has leaves of green and an abundance of white flowers. If it is well looked after it can produce a second flush in early autumn.

The most popular variety is ‘Sundance’ that has dark green mature leaves and lime green new foliage. In late April to late May, it produces a flush of scented, small, white flowers but it does not easily produce a second flush.

CHOIYSA x DEWITTEANA is the other genus that is recommended. The main variety is ‘White Dazzler’ that has dark green mature leaves that appear lighter whilst younger. In late April to late May, pure white, small flowers that have gold coloured stamens are produced with a chance of a second flush in September. It is a low growing shrub and needs little in the way of pruning, where a final height of 1.2m is reached. It is also one of the hardiest of all the Choisyas, able to take very harsh winters.

ONCE ESTABLISHED LITTLE CARE IS NEEDED

Once the plant is established it requires little in the way of care. As long as you position the container in a sheltered position in as much sun as possible, it will do fine.

Water well in the first year and after that they will look after themselves. It will not even need to be weeded as the canopy of leaves will stop the wed from growing underneath.

You do not need to prune but if you want to neaten the plant and to keep the plant in shape and size, you can clip immediately after flowering in mid-June.

As said earlier an annual dressing with mulch should help to minimise the watering requirements.

Choiysas do not suffer from many pests and diseases, the only major problem is that the top leaves can die back in cold weather. All you need to do is cut back these dead leaves and allow new growth to appear. You will also notice that some leaves will be nibbled by slugs and snails. To prevent this, you can use woolly deterrent mats or slug pellets, but the damage is often small. The leaves can be easily picked off.

In this article, we have discussed how to grow Choiysa in containers. It is an easy shrub to grow in containers as long as you use the right container size with the right plant within it. Once established it needs little care, only an annual mulch and feed, and watering in very dry and hot weather. It does not even need to be pruned unless you want to do so. A delightful plant to have in your garden.

If you have any questions or comments that you wish to make ion growing Choiysa in containers, please do so in the comment box below,