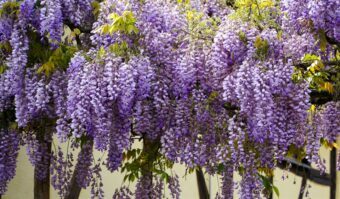 In this article, we will be discussing how to grow wisteria in containers. Wisteria is one of the most spectacular vines you can grow in your home, even more than clematises. It only not looks spectacular but it is also long-lived.

WHAT IS A WISTERIA?

The vines that are produced tend to be heavy, twining deciduous and are decorative on their own right but this is nothing compared to the numerous long clusters of pea-like blooms that are borne in spring. These are followed by conspicuous seed pods that last well into winter.  The flowers are not only beautiful to look at but are fragrant and usually blue-violet or white. They can be occasionally pink or mauve but these are rarer.

Wisteria often looks its best either growing on the side of walls or around an arbour, where the flowers can hang down and be admired from below. Most people think that a plant that big and beautiful cannot be grown in containers but you will be wrong. You just have to think about growing it in a different way, which will be explained later.

No matter what support you use, it must be strong enough to take the weight of the plant or otherwise goodbye support. Do not be tempted to grow up in a tree, as the wisteria can harm the tree.

Saying all about the positives of having a wisteria, they do have their problems. The vines can be difficult to control, especially in warm summers where they can be rampant. This can damage pebble dashing and rendering, so you do have to be careful.

They can be moody plants produce a lot of vine leaves and then no flowers. If you enjoy Wisteria and have no room to grow them in the ground and you are looking for a challenge, then they are well worth the effort.

WHAT WISTERIA VARIETIES TO GROW?

Wisteria sinensis (Chinese Wisteria) is hardy to -15 degree Celsius, where the vine twine anti-clockwise. It bears blue-violet flowers that can grow up to 30cm long.

Wisteria floribunda (Japanese Wisteria) is similar but the blue-purple flower clusters are bigger and the leaflets are more impressive and more numerous. It is a little hardier than the Chinese Wisteria but it twines clockwise.

A hybrid of the Chinese and Japanese varieties is called Wisteria x fornose and is hardy to -25 degree Celsius. Why you want to grow this hybrid is that its flowers are more fragrant than the other varieties that you can buy. Its flowers, like the Chinese Wisteria open all at once, whilst those of the Japanese Wisteria open from the top down and hence last for a longer period.

They are not instant plants as they do tend to take a long time to flower. Patience is a virtue with Wisteria.

HOW TO GROW WISTERIA IN CONTAINERS

You need to grow Wisterias in full sun as they do not take shade well. If you are growing in the garden, you will need to offer a strong support structure, where air can circulate around the plant. Saying that they need good ventilation but they do not like strong winds, which can batter the plants.

Plants in gardens are grown in this way, but wisteria in a container are growth differently. It is better to grow these plants as standards like you would grow roses and gooseberries.

What you need to do is use as a large as possible container with good drainage. Make sure that the pot has plenty of drainage holes. This is the eventual goal, but it will take several years to get there.

First, you need to buy a container specimen and then find a cheap container that is slightly larger than the one it comes in (the next container size up will be sufficient). Make sure the container has sufficient drainage holes and then fill it with multipurpose compost with John Innes no 3. Place the plant the same depth it was imp from the shop you bought it. Spread out the roots before backfilling the plant with compost.

Once the plant has become root bound, it is time to move the plant to the next available pots size up. Once it has reached a half-barrel size, you have reached the optimal container size. If you prune and look after it well, it should give you many years of enjoyment.

The young plant should be fed, watered and staked for a few years until it is well-established. Once this happens they should do well on their own, apart from annual pruning. Some wisteria plants are grafted and with these, you have to make sure that the graft union (the bump on the trunk of the vine) is planted beneath the compost level.

HOW TO GROW WISTERIA AS A STANDARD?

Start with a specimen that is young and only has a single stem. Insert a 1.8m support stalk next to the plant in the container. This will give the basic main stem of the standard.

Tie the stem to grow vertically on the supporting stalk but do not let it twine, as this will make it difficult to prune and train.

The plant main stem, known as the leader should be allowed to grow unheralded until it reaches the top of the support. The growing tip should be then pruned off in the following February. This will encourage side-shoots to form.

The following winter, the side-shoots need to be pruned back to 12cm from the main stem. This should be repeated each winter to gradually build up the structure. Any weak or growth that looks odd should be cut out entirely. If the growth becomes too dense, older branches can be pruned out to open the structure out further.

As the crown develops, you need to prune in August by cutting above the seventh leaf any shoots that are not growing above the head.

The following February cut back those shoots to 2.5cm above the base.

You now have a standard wisteria in a pot.

Wisteria tends to be trouble-free, no serious pests or diseases. The biggest problem as said earlier is to get the plant to bloom, even on well-established plants and plants that have bloomed in previous years.

This reluctance to bloom could be because the flower buds have been killed by heavy frosts. You may have to protect the plants from spring frosts, which is easier in container specimens, as they can be covered by a fleece or moved to a sheltered location.

If you check in autumn and discover no flower buds then the problem may be the root system itself. Instead of producing flowers, the plant is creating suckers.

You have to root pruning the vine, slicing the root with a sharp knife in a circumference of 60cm from the main stem. By cutting the roots, you can trick it to produce flowers again. It is also good to add some superphosphate fertilisers deeply into the compost at the same time. When you add the fertiliser make sure you do not add it to where the root has been severed, as this will encourage them to grow again.

In this article, we have discussed how to grow wisteria in a container. It is generally an easy plant to look after, once you get the pruning right. If you feed the plant and remove suckers, it should flower but this is not guaranteed.

Sometimes Wisteria produces leaves but no flowers and you have to take drastic action to get it to flower once more.

It may work or it may not. You have to try to see if it works or not. If you want the beauty of having Wisteria in containers, then you should try to grow them in containers without any hesitations.

A beautiful plant that is well worth the effort.

If you have any questions to ask or comments to make, please do so in the comment box below.

4 thoughts on “Growing Wisteria in Containers- Growing this Beautiful Climber”