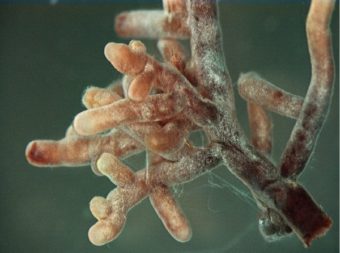 In this article, we will be discussing the benefits and hindrance of using mycorrhizal fungi (alternatively know as mycorrhiza) in the garden. A lot of information has been written about the role of these fungi in gardening, some rave about them, whilst others say that they occur naturally and therefore will not need to be introduced to the soil.

There are arguments for both sides but what is the truth?

First, we need to discuss what mycorrhizal fungi are?

Mycorrhiza comes from the Greek Words ‘Mykes’ meaning fungi and ‘Rhiza’ meaning roots. The word translates as fungi roots or fungi for the roots.

These can be seen as beneficial fungi that live in harmony with the plant root section. Like all fungi, they live on sugars, in this case from the plants itself. In exchange, the plants get a source of moisture from the fungi and they release nutrients from the soil, gathered by the fungal strands.

In effect, the mycorrhizal fungi act as an extension to the root system and help the plant to absorb more nutrients.

Phosphorus is the Key

As mentioned in previous articles, phosphorus is important for root development and in natural soils, it may be in short supply. Phosphorous is mainly found in the form of phosphates and therefore insoluble. Plants will go searching for sources of phosphorus at the roots and it will do so unaided by any gardener.

This will result in quite an elaborate network of roots being formed in the plant quest to find phosphorous. It is thought that mycorrhiza helps in the gathering of this element in soil that has not been cultivated.

If phosphorus is added via fertilisers to cultivate soils or to composts then this can have a detrimental effect on the fungi present. Once phosphorus is found its stops the fungi in its tracks. This is why phosphorus-rich fertilizers are not recommended to be used with mycorrhiza, as the resultant benefit will not exist.

Mycorrhiza tends to be found at the roots of many plant species and the beneficial relationship exists although for some the plant and fungi cannot get along. Plants that belong in the Brassica or Crucifer family cannot and so do the many species of the Amaranth family.

This has a symbolic relationship with the roots as around 10% of plants follow this method. These include many woody plants including trees, roses and members of the orchid family.

There are many forms of endomycorrhizal, each type is prevalent in the different genus of plants. You do not have to know about them as this article will get too technical and too long.

HOW DO MYCORRHIZAL FUNGI WORK?

Mycorrhizal fungi have a mutual benefit relationship with the roots of 95% of plants that are found in nature. In this relationship, the plant itself and the part of the roots that have contact with the fungi, are all technically known as mycorrhizal.

When they say 95% of plants have this relationship, this can be roughly divided into two categories; plants that will benefit if mycorrhizal fungi are present and secondly those whose lives are dependent on mycorrhizal fungi.

The latter is associated with the orchid family as without the right culture the seeds will die and even fail to germinate. More research has shown that the relationship is not that simple but a more complex relationship exists that will benefit both parties. It is not a simple give and takes relationship.

As said earlier mycorrhizal fungi give plants nutrients whilst directly accessing sugars such as glucose and sucrose. The sugar food is usually taken from the leaves and directed to the roots and then take up by the fungi.

In return the plants’ gains from the fungi ability to absorb water and nutrients. This is partly because of the fungi structure that creates a large surface area and also because the finer and longer hyphae (the long branching filament structure that forms on certain types of fungi) absorb nutrients better than the fine root hair.

This is aided partly because some fungi can mobilize minerals in the soil that will be available to the plants’ roots where much more minerals will be absorbed.

NUTRIENTS ARE TAKEN PHYSICALLY AND CHEMICALLY

If the mycorrhiza is not present the nutrients cannot be taken chemically or physically, especially phosphates ion and iron ions. This can commonly occur in soil of heavy clay or when the soil is too alkaline. The fungi can access these nutrients and help the plant to colonize and this can occur even if there is no soil present.

Nutrients may also be not available if organic material present is slow to decay. In this case, mycorrhizal fungi can act on the decaying matter releasing the nutrient and passing it on to plants. Plants in this way can get their nutrients from decaying leaves on the surface.

In some complex arrangement, the fungi do much more than simply collect nutrients. They can form a network of underground hyphae where water, carbon, and other nutrients are passed on from plant to plant.

As said the mycorrhizal fungi increase the absorption of nutrients by physical means, whilst others rely more on chemical means. Most mycorrhizal cells are much smaller in size than most hair roots and therefore can reach parts that roots and root hairs cannot reach. The cells provide a larger surface area and so more minerals can be absorbed. This is how mycorrhiza works physically to get their nutrients.

WHAT OTHER BENEFITS DO MYCORRHIZA OFFER?

Research has shown that plants that have mycorrhizal fungi can have and receive warning signals, especially if that plant is attacked by aphids. Plants in the mycorrhizal network can warn other plants of its conditions and the plant under attack can release chemicals that will attract the insects’ predator. All plants down the line will also be prompted to produce the same chemical and therefore to protect themselves from the same insect attack.

Plants in containers are often grown in sterile growing media and can perform poorly without the addition of mycorrhizal fungi to colonize the roots and help nutrients uptake. In a nutrient-deficient container, a lack of fungi can slow plant development. If nutrients are present and the roots are well developed than adding mycorrhizal fungal will be a waste of time.

Fungi have been found to have a protective role for plants that root in soils in acidic and contaminated soils. This could be due to the toxic metal ions becoming bonded in the cells of the fungi, without affecting the exchange of beneficial nutrients.

WHY YOU SHOULD NOT USE MYCORRHIZA FUNGI FOR ALL CASES?

The biggest problem is that garden soil already has large quantities of mycorrhizal fungi, especially if plants have grown in it in the first place. Adding mycorrhiza to the soil where it is already present will be a waste of money.

Mycorrhizal fungi come in two types but there are many more types of mycorrhiza and other beneficial fungi. Some of these fungi will only work with certain plants, so how do you know if the mix you are using is the right one?

Mycorrhizal fungi need to be stored in a controlled temperature. If it is too high such as found in a lorry or a greenhouse can result in the fungi dying and becoming ineffective. You do not know how the product has been stored and it can result in being supplied with no living fungi at all.

The species of mycorrhiza are specific to different regions of the world and not necessary to your own. It is theoretically possible to introduce foreign species that will not benefit your native plants or in fact, they can do the exact opposite. Try to find mycorrhiza fungi native to your country.

In this article, we have discussed the importance of using or not using mycorrhizal fungi. Mycorrhizal fungi have a beneficial relationship with plants in general, they can help with moisture uptake as well as the uptake of nutrients.

If nutrients are in great supply then mycorrhizal offers no benefit at all. In fact, high phosphorus can kill them.

If you have bare soil where no plants have ever grown or you have containers where not too much fertilizer have been added then it is recommended to use mycorrhizal fungi. You might as well save money and buy a decent fertilizer.

If you have any questions that you wish to raise and comments you want to make, please do so in the comment box below.

8 thoughts on “Why the Container Gardeners Should Use Mycorrhizal Fungi? (and Why Gardening in Borders Should Not)”