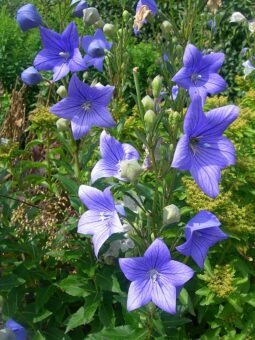 In this article, we will be discussing how to prune perennials so that the plant can be manipulated for your benefit. Try using these techniques so that you can extend or renew blooming, encourage new lush growth, reduce the plant height, keep them from becoming invaders and to prevent pests and diseases from taking hold.

In a previous article, I have discussed the rough guide on how to prune plants that included perennials, but in this article, we will go further.

CUT BACK TO REDUCE HEIGHT

If you have a windy, exposed site such as a roof garden or have tall plants that will need to be staked in spring and summer, then this is a technique for you. One technique that can be used is to reduce the size by cutting back. This is useful for summer and autumn flowering perennials in early to mid-June before they are in flower, as this will stop them from becoming too tall.

In most cases, this will result in smaller flowers but in a larger number. It is a balance between the blooms that you want and the potential damage a summer prune can do. Think less stalking rather than small blooms.

All plants will respond differently due to how old the plant is, how vigorous it is and the prevalent climate. It is found by using this technique you can delay flowering by two weeks. The harder you cut it, the greater will be the delay in flowering. Can be used if during summer you go on holiday and as you come back you will be surprised with some flowers.

IT WORKS FOR NUMEROUS PERENNIALS

This technique works well for Platycodon grandiflorum that tend to flop everywhere, where it can be pruned to half its height in June. These can be done with species of phlox, where it can be cut back when the plant is coming into bloom. You will end up with more compact flowering perennials like Sedum ‘Autumn Joy’ that often grow too big and then flop over, revealing an unsightly woody centre. You will delay flowering but then it will not need staking.

Rudbeckias often grow too tall and flop over in the slight wind. To save this, 2/3 of the growth as the flowering buds appear in early to mid-June can be cut back. Eupatorium maculatum can grow up to 4.5m in a good year but if you do not have space, you can chop it by half in June for a more manageable plant.  Do not cut less than 30cm in height, otherwise, the plant will not flower.

Asters can be chopped by half in late May to get an improved growing habit. This is important if it flops all over the place on wet summers. A smaller plant that will look much more attractive.

Another technique that can be used that is tried and tested is to choose the Chelsea chop. This is when growers would chop back the spring and summer flowering perennials when the Chelsea flowering show is on (normally in May). This would cause the plants to grow a new flush ready for flowering in summer. The trick for it to succeed is to be brutal and cut the whole plant back to its base. If you are brave enough to do this and give the plants a lot of water and fertilizers, it will reward you later on.

Good candidates for Chelsea chops are hardy Geraniums that flower in May and June. This is because once they have finished flowering they become unsightly. Cut them right back to their base and they will respond with a lot of new growth and a second flower for the season. If geranium leaves appear in the middle, then it is best to trim the old leaves and allow the new leaves to develop. Do not prune back late summer flowering geraniums as you will spoil the show.

Brunnera macrophylla can be encouraged to flower again if after flowering has finished it is cut to the base. This will give rise to new leaves and new flowers later on.

Pulmonarias with their spotted leaves and beautiful blue flowers in spring but by summer the foliage looks unsightly. Once they have finished flowering in spring, you can cut back all the old leaves. This will encourage new leaves to come from the centre and if you water well, you find sporadic flowering in a mild summer.

DELPHINIUMS CAN BE DONE THIS WAY

Protect the young leaves from slug and snails and soon they will grow back. The only problem is if you do this every year, you will exhaust the plant and they will need to be replaced more frequently, but the display will be a sight to remember.

Oriental poppies are another candidate and after they flower they are nothing special. Once flowering has finished, cut all the stems back to the ground and water the plants to get a second flush later on the year. The leaves will start looking brown and so you will need to be quick so that you can get them to flower again. Do not let the flower form seeds, as they will prevent a second show. In a heatwave, it can be difficult to get them to flower again, so it is always a risk.

In this article, two pruning techniques have been proposed that can help you in your display of perennials. You can use cutback to keep your perennials short and more productive or the Chelsea chop to give you a second flush that can be used for certain flowers.

No matter what technique you use you can extend the flowering period or make your plant look studier.

If you have any comments that you wish to make on this topic, please do so in the comment box below.