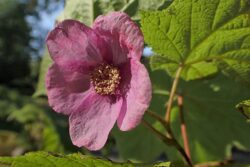 In this article, we will find out how to grow the beautiful and not-often-seen flowering shrub of Rubus in containers. We are talking about plants that are grown for their colourful stems in winter or their floral displays or their fruits.

The popular, large white-striped, Rubus cockburnianus, is not suitable to be grown in containers as the plant is simply too large and unruly.

Rubus is a large and diverse genus of flowering plants that belong to the Rosaceae (Rose) family with over 1350 species known to exist. The familiar plants in the family are raspberry, blackberries and dewberries, and are found all over the world. Most Rubus are plants that have woody stems and thorns like roses. Spikes, bristles and gland-lipped hairs are common in the genus.

Ornamental brambles are a group of deciduous or semi-evergreen shrubs. As mentioned earlier, some are grown for the colours of their stems or canes as they are alternatively known. Severely species and cultivars are grown for the pretty white or pink flowers that appear from spring all the way to early autumn or for the colourful leaves that are produced in autumn.

They are all arching bushes and all of them produce single, rose-like flowers with a central boss of golden stamens. The flowering period depends on the species and varieties grown. The flowers are followed by fruits that are edible but they are bland and not worth the effort of growing them for this purpose.

These will be highlighted in this article, along with how to grow them.

Whatever you choose make sure it has plenty of drainage holes to allow any excess water to drain away. To the inside of the container add multipurpose compost to within 5cm below the top rim.

Dig a hole at the centre of the container that is slightly bigger than the root ball it came in the original pot that you bought it in. Place the plant in (avoiding the thorns if they have them) the hole so that the top of the root ball is at the same level as the top surface of the compost in the container. Backfill with the growing media so that no vacant spaces remain, using more compost if you deem it to be necessary. Firm the plant in and water it well. Larger containers will produce more vigorous plants and result in better flowers. To conserve moisture you can add a mulch of wood chippings or gravel. This will also reduce the formation of weeds.

You will need to place your container against a wall or trellis in full sun or partial shade so that the stems can be allowed to grow up them.

Water well until it is well-established and after that, you should water when 5cm below the top surface of the compost feels dry to the touch.

Every spring give an annual feeding with either leaf mould, well-rotted manure or garden compost. This should give enough nutrients to last throughout the growing season.

Pruning is species and variety specific. For ornamental shrubs that are grown for their flowers, you will need to remove some of the older stems by cutting them, especially the dead ones and any damaged branches.

For those varieties grown for the colourful stems, you will need to remove all the old branches in early spring to encourage them to grow new shoots.

If your plants have become unruly and evergreen you can prune all stems to the ground. If necessary. This could be recommended for those who grow them in containers.

Plants in containers after a few years can be divided into various sections, whilst dormant from October to March. Each section can be planted individually in its own container.

In general, the shrubs are left alone by pests but grey mould can be a problem. To avoid it is best to be careful when cutting back and to promote good air circulation between the stems and leaves. Keep moisture away from the stems and ensure there are no open wounds on the plant.

The main species to grow is Rubus odoratus which is different to other species. First, the stems are thornless, they do not arch and the leaves are velvety. The flowers that are produced are purplish, and rose-like and appear in clusters between June and September. It will grow up to 2.5m high.

Rubus illecebrosus is a low-growing species with whiter flowers and produces large red fruits. It grows up to 1.5m high.

Rubus thibetanus is a dense, prickly-branched, clump-forming shrub that makes a superb security shrub. Fern-like, green leaves with silvery undersides cover the stems in spring, before the small, purple flowers appear in summer, borne singly from the leaf axils. Black, inedible fruits replace the flowers by autumn and last into winter unless eaten by birds. Will grow up to 2m high.

In this article, we have discussed how to grow Rubus- not the edible, fruiting kind but the ornamental bramble in containers. They are grown for the colourful stems, flowers or leaves that they produce. They are easy to care for, easy to look after and a delight to have if you have the room to grow them. You do not only need to grow them for the fruit that they produce but the flowers and autumn-coloured leaves.

If you have any questions or comments that you want to make on growing ornamental Rubus in containers, please do so in the comment box below.