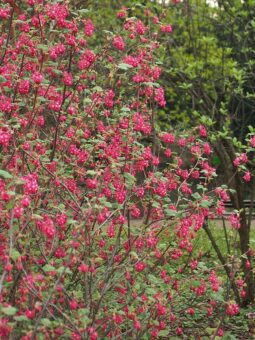 The most popular one of these is flowering currants, which are seen in flower in early spring in gardens everywhere. Ribes are a fairly large genus of flowering shrubs that belong to the family Grossulariacae (the Saxifragales family). They are native to the colder and temperate regions of the North Hemisphere. They have the common name of currants or gooseberries with some producing edible fruits.

Most Ribes species only grow up to 2m tall and all are markedly different in the flowers and fruits they produce. The leaves tend to be palmately lobed or compounded, but are not its main talking point. The leaves are deciduous, changing to bright colours before dropping off in autumn. Some like gooseberry have thorns, whilst others are thornless.

The flowers have large sepals, larger than the petals and are fused into a tube or saucer shape. The flowers are followed by ovary seed pods, mostly in the form of a berry that contains many seeds.

Find out how to grow Ribes in containers in this article.

First, you will need to choose a large enough container that will suit and be balanced with the shrub in question. Whatever you choose it must have plenty of drainage holes at the bottom. To the bottom of the container add a 2cm layer of gravel to aid drainage even further. On top of this add multipurpose compost to within 5cm below the rim to which a couple of handfuls of slow-release, general-purpose fertilizer has been mixed in.

Dig a hole in the centre of the container slightly bigger than the root ball it came in the pot you bought it in. Place the plant so that the top of the root ball is at the same level as the top surface of the compost in the container. Backfill with the growing media so that no gaps remain at all, using more compost if you find it necessary. Firm the plant in and water well.

It is best that you place your container in a sunny spot as this will help to produce the maximum number of blooms. In light shade, it will bloom but fewer flowers will be observed.

Ribes are not heavy feeders but in March or April, you can give an annual dressing of slow-release, general-purpose fertilizer especially after pruning the plant.

Pruning is not essential but if you want to keep the plant compact and in shape, then you would need to do so. The best time is to cut back shoots that have bloomed in this year’s growth. You can also remove old and unproductive wood as this will encourage young stems to form and then grow. This will produce next year’s flowers.

On neglected plants, you can remove 20% of the older stems by cutting close to the base of the plant each year.

To propagate plant semi-ripe cutting in a cold frame in early summer. If this does not work, you have a second chance by taking hardwood cuttings in late autumn and leave them to the elements.

Ribes, in general, are pests and diseases free, but they can suffer from honey fungus, which is often assigned that the plant is dying. If observed, it is better to get rid of the plant as it will not survive in the first place.

The most common ornamental currant you will find is Ribes sanguineum (the Flowering Currant). It is an upright shrub that grows up to 2m high and produces drooping clusters of small flowers in March/April. The flowers are followed by black fruits. The usual flower colour is an insipid pink, but more colourful named varieties are possible. This includes ‘Purloburough Scarlet (Red Flowers)’, ‘King Edward VII’ which produces Crimson flowers, and a final variety is the compact 1m shrub of ‘Brocklebankii’ which has golden leaves and pink flowers.

An alternative species is Ribes odoratum which grows up to 2m high and bears, highly fragrant, yellow flowers in April. In autumn purple fruits follow,

Another more uncommon species is Ribes gordonianum which produces orange flowers. A final special that must be considered is Ribes speciosum, which is tender but can be grown against a sheltered, south-facing wall. It produces red, Fuchsia-like flowers in spring.

If you have any questions or comments that you wish to have on growing Ribes in containers, please do so in the comment box below.