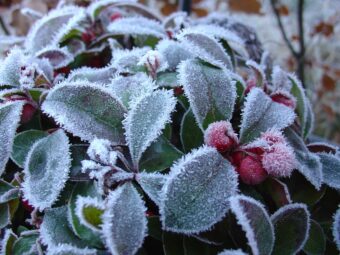 In this article, we will be discussing how to grow this excellent shrub called Gaultheria in containers. Unlike other shrubs Gaultherias are small plants, only growing up to 1.2m in height. This is a plant that is grown for its colourful berries that appear in late autumn around Christmas time.  Several forms of Gaultheria exists but in the UK, Gaultheria procumbens is the easiest species to grow.

They are original from North America and it will come as no surprise that they are totally hardy, able to withstand very cold temperatures. The other species that you may see is Gaultheria mucronata.

People tend to notice the berries but the leaves themselves are interesting to look at, as they are often prickly, dark green and evergreen. This gives interest to a season when little is in colour. The leaves turn a light pink hue in winter, giving even more interest,

In July, small, light pink, white or red flowers appear in small to moderate clusters that last until mid-August. In late autumn these flowers will produce berries of white, red or pink. A plant that likes to hide from the sun, so it is best to grow in light or dark shade.

IT IS A HARDY PLANT

As said early, it is hardy to -10 degrees Celsius and so will survive in most areas in the UK without dying. In containers, it will need no pruning at all, as the roots will not spread as it does in the ground.  The only thing you need to do is cut off any suckers that are produced at ground level.

One thing that must be noted is that the plant can cause serious illness if it is consumed especially the leaves. This is because the berries look good enough to eat but the good news is that the berries are the least poisonous part of the plant.

These shrubs are great in autumn and winter container displays, where often they are sold at this time. It is a shrub for the year and not for only these seasons.

You are guaranteed to have berries if you have bought it in berry but in some species, if there is no male partner within the vicinity that will be the only time it will form berries. You will therefore need two containers for Gaultheria mucronata-one for a male and one for a female variety but only one for other species of Gaultheria.

Two varieties of the same species will ensure that the male pollen is transferred to the female flowers, ensuring that berries will appear in the winter. If you buy Gaultheria procumbent, it is self-fertile and so only one plant will be required to have the show of berries

HOW TO PLANT GAULTHERIA IN CONTAINERS

To plant Gaultheria you need to plant in partial or full shade, as it will not do well in full sun. Use a large container around 30cm in diameter and height and fill it with 70% ericaceous compost by volume mixed with 30% by volume of horticultural grit, to give a free-draining growing media.

Dig a hole twice the size of the root ball and sprinkle a handful of growmore into the compost. Place the shrub in the hole, backfilling with soil so it is at the same depth as it was in the original container. Fill any gaps with more compost and firm the plant in. Water well and allow the compost to settle down around the root ball.

The plant should be fed between March and August with a handful of growmore each spring. When you water use rainwater when at the first knuckle of your middle finger feels dry to the touch when you stick it in the compost. Always make sure that the compost is never total dry.

Once a Gaultheria becomes established it needs little in the way of care. All you do is water in dry conditions using rainwater rather than tap water. In the first three years, it will not need pruning at all and only once the shallow roots start to be spread, which can be done any time of the year. Young plants will need to be watered until it establishes, which can be up to a year.  Remove any suckers that develop during the growing season.

The good news is that the plant suffers from virtually no diseases or pest attacks.

There are two varieties of Gaultheria to grow here in the UK- Gaultheria mucronata and Gaultheria procumbens.

Gaultheria mucronata has shiny, spiky, dark green leaves and in May and June nodding urn-shaped, white flowers appear. These are followed by colourful berries as mentioned before.

Gaultheria procumbens has rounded, simple, leathery leaves that turn a glorious red in October. In summer, bell-shaped flowers are produced that are followed by red berries.

In this article, we have discussed how to grow Gaultheria in containers. As you can see, it is an easy shrub to grow as long as you grow it in acidic soil and grow it in the shade. In containers, all you need to do is remove any suckers that grow and give it an annual feed of fertilizer to give the plant all the nutrients it needs for the growing season.  A plant that will certainly brighten up your display for Christmas.

If you have any questions or comments that you wish to make on growing Gaultherias in containers, please do so in the comment box below.