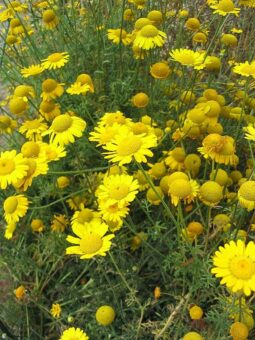 In this article, we will discover how to grow the hardy perennial of Anthemis in containers. It is a member of the Aster family and is therefore noted for the numerous daisy-like blooms that they produce.  The flowers and the finely divided green leaves tend to be aromatic, where they tend to be found growing widely in Mediterranean regions and Southeast Asia.

It has the common name of chamomile or dog fennel or even Mayweed. Each bloom that is produced has a central predominant golden boss, surrounded by white or pale yellow or yellow or orange petals, depending on the variety grown.  There are over 100 species in this genus with most being perennials or sub-shrubs.

Several cultivars can be grown in containers (see later for which). They tend to be medium to tall plants, growing up to 90cm in height and because of this and the numerous stems it produces, means that they require that the plant is staked or supported. Some species of Anthemis are tender and are best grown as annuals but most you are likely to find and buy are hardy perennials.

You can grow the annual Anthemis and the tender perennial from seed. To do this, start sowing seeds indoors 4 to 6 weeks before the last frost date. First, fill a seed tray with a moist seed sowing compost and on top of this, sprinkle the seeds thinly on the surface. Cover the seeds with a 3mm layer of sieved compost and place a propagator lid on top of the seed tray. Place the seed tray in a warm spot and after 2 to 3 weeks the seeds should have germinated and you can take the propagator lid off.

Once the seedlings are large enough to handle, you can prick them out to transplant individually into 7.5cm pots full of multipurpose compost. Allow them to grow on until Mid-May when you can start to harden off the young plants for planting out in late May.

NOW IS THE TIME TO PLANT

At this stage, shop-bought garden-ready plants and home-reared seeds can be treated in exactly the same way. First, choose a container that is well-proportioned to the plant and will bring the best from the plant itself. Whatever you choose, make sure it has plenty of drainage holes. To the container, add a 1cm layer of gravel to aid with drainage. On top of this, add to 5cm below the top rim, multipurpose compost. At the same time as filling the container, mix a handful of slow-release fertilizer to give an initial boost.

Dig a hole at the centre of the container that is slightly bigger than the root ball of the original container. Drop the plant in so that the top of the root ball is at the same level as the top surface of the compact. Backfill with the growing media so that no gaps remain, using more compost if necessary. Firm the plant in and water well.

Place the container in full sun where the flowers can be appreciated. Until the plant is well-established, it will need to be watered regularly and especially so when 5cm below the top surface of the compost feels dry to the touch. Once established the plant will take drought pretty well.

You will need to give an annual dressing of slow-release fertilizer every spring to get it through the growing season. As said early, taller varieties will need to be stalked to avoid them falling all over the place. Once the flowers are spent, you can cut down the stems to near the base of the plant.

After a few seasons, it will get congested, so you can divide clumps in spring or autumn, ensuring that each division has a growing point associated with it.

Luckily the plant does not readily suffer from pests and diseases, but young leaves may be tempting for slugs and snails, you will need to protect your plants by using slug pellets or wool deterrent matting.

The most common species found is Anthemis tinctoria (Golden Marguerite), which is a shrubby perennial with light green, divided leaves. On top of these stems, golden yellow flowers appear. Named cultivars include the golden yellow ‘Grallagh Gold’ and the pale yellow ‘E.C. Buxton’.

A smaller species is A. punctata subsp. cupaniana which has silvery-grey foliage and white, daisy-like flowers.

A. sancti-johannis has finely cut fern-like green leaves and on top of this, orange daisy-like flowers appear.

A. nobilis (Chamomile) is more of a spreading species of Anthemis, with bright green leaves and small yellow flowers.

In this article, we have talked about how to grow the beautiful daisy-like Anthemis in containers. As you can see they are generally easy to look after, easy to care for and you have plenty of choice as to what variety you can grow. It is relatively pests and diseases free as well, so what is not to like?

A plant that will suit your container display, so why not grow one today.

If you have any questions or comments that you want to make on growing Anthemis in containers, please do so in the comment box below.