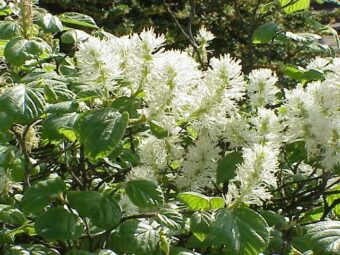 In this article, we will discover how to grow Fothergilla in containers. Fothergilla, which has the common name of witch alder belongs to the family of Hamamelidaceae (the Witch Hazel). It is a small genus of flowering deciduous shrubs of 2 to 4 species. Fothergilla is native to the woodlands and swamps of the Southern United States of America. They are suitable to be grown in containers because they are low-growing shrubs that have a downy habit.

From April to May, bottlebrush-like flower heads appear on terminal spikes. The flowers are produced without petals but instead are clusters of 2 to 3cm long white stamens, giving an appearance of a fluffy white ball.  The flowers are also scented so adding to their appeal. After the flowers disappear, alternative broad oval-shaped, long green leaves are produced. They are coarsely toothed margined and pointy at the end.

This is a boring flowering shrub whilst not in flower and does not have interesting leaves but in autumn the plant will reward you with a firework display of yellow, orange and red leaves.

Find out how to grow this wonderful shrub of Fothergilla in containers in this article.

To grow Fothergilla successfully in containers, you will need to replicate its natural growing environment in the swamps. First, choose a container that is large enough for the plant and does have some drainage holes at the bottom but not too many. To this container add ericaceous compost to a level of 5cm below the rim and to which handfuls of manure have been added. This will create an acidic rich growing media in which the shrub should thrive.

Dig a hole at the centre of the container in the compost slightly larger than the root ball it came in its original pot. Drop the plant in the hole so that the top of the root ball is at the same level as the top surface of the compost in the container. Backfill with the ericaceous compost, making sure that any vacant spaces are filled, using more compost if necessary. Firm the plant in and water well. To help the plant maintain moisture add a 2 cm layer of mulch such as bark chippings. This will also suppress the formation of weeds.

You can place your plant in a sunny location or where it will get partial shade. You will need to water the plant well until it is well-established but after that, it will take drought conditions very well. Saying that it would be better to water with rainwater as soon as the top surface of the compost feels dry to the touch.

As the plant is used to growing in swamp conditions, it will not need fertilizing but you can give a feed each spring a half the recommended dosage with a slow-release ericaceous fertilizer.

Pruning is not required as Fothergilla have a formal branching habit, so little pruning should be untaken. All you need to do is cut back dead stems in late winter or early spring, once the flowers are gone. Fothergilla flowers in precious year’s growth so the show will not be spoilt next year.

To propagate you can layer stems in autumn for growing and planting out the following year. Some species and varieties have a suckering growth habit, but this can be dealt with by cutting off unwanted suckers at the base of the plant.

Luckily this is one plant that does not suffer from pests and diseases. They do like moisture at the roots but are not waterlogged. This is why some holes will be required at the base of the container. If it is watered too much with alkaline hard water, can show as chlorosis (yellowing) of the leaves. To avoid this add some sulphate of iron every spring to keep the leaves green and healthy.

The species to grow and the ones you are likely to find are;

Fothergilla gardenii (Dwarf Fothergilla) is the small one (reaching a height of 1.3m) and has colourful foliage in autumn.

Fothergilla major (Large Fothergilla) can grow up to 2m in height and is noted for the yellow, orange, red and gold leaves in autumn.

In this article, we have discussed how to grow the compact white flowering shrub of Fothergilla in containers. They look pretty in spring when bare branches are covered with white flowers. They are easy to care for and easy to look after as long as it gets enough water, especially in dry weather. You do have a choice but not a large one which makes selection easier.

If you have any questions or comments that you wish to make on growing Fothergilla in containers, please do so in the comment box below,