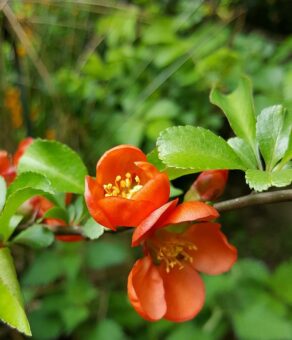 In this article, we will discuss how to grow the popular shrub of Escallonia in containers. Escallonia is a genus of flowering shrubs that are made up of 130 species divided into 7 genera. Escallonia is one of these 7 genera, where they can grow up to 3m in height. It is a popular plant used for hedging but that does not mean it cannot be used as a specimen plant in containers.

At first, the branches will grow upright but soon the branches will start to arch downwards. Each stem will be clothed with small, oval glossy green leaves. It is not grown for its leaves but for the small, bell-shaped flowers that come in white, pink and red that appear from June to October. Sometimes the flowers can be honey-scented, so adding to their appeal.

You will not be short of choice, as so many cultivars and hybrids have been developed.  They are also tough plants growing in dry conditions and soils and are worth growing. It is not fully hardy so you will need to grow against a sheltered wall to protect the plant.

Find out how to grow this delightful shrub in containers in this article.

First, you will need to choose a container that is large enough to hold the shrub in question and also will be well balanced. A half barre; is ideal, but whatever you choose make sure it has plenty of drainage holes. Fill the container with a 2cm layer of gravel to aid drainage further and on top of this add multipurpose compost to which a handful of fish, blood and bone has been added.  Fill the container to within 5cm of the rim.

It is best to plant in spring so that it gives the plant enough time to establish before winter arrives.

Backfill with the growing media, making sure that no vacant areas remain, using more compost if necessary. Firm the plant in and water well.

You will need to grow Escallonias in full sun or partial shade to do well.

Feed every spring with a general-purpose slow-release fertilizer. This will give enough energy to the plant so that it will do well during the growing season.

You can prune Escallonia hedges by trimming lightly after it has finished flowering. Only do this once, otherwise, the number of flowers will be reduced. Do not be tempted to do it too frequently as the result will be a neat bush but fewer flowers.

For standalone shrubs, you can prune congested and overgrown shrubs by thinning using the ‘One in three’ method. In autumn, cut back about one-third of old branches that have flowered. You can cut them near to the ground or where two main stems join. This can be repeated in subsequent years to gradually regenerate the shrub.

To propagate you will need to take in late summer some semi-ripe cuttings. Use a sharp knife to cut just below a leaf joint and remove the leaves on the lower two-thirds of the cutting. Dip the base in hormone rooting powder and place the cutting in a small pot full of moist seed and cutting compost.

Place the cuttings in a cold frame and allow them to grow on to be planted out the following year.

Escallonia does not seem to be attacked by pests but in the terms of diseases, they are not so lucky. They can suffer from fungal diseases, especially if the plant is stressed. You will notice that dark spots will appear and the leaves will turn yellow and fall, If the disease is very bad, you will lose most of its leaves. To avoid this, you will need to collect all fallen leaves and by picking off the worst of the discoloured ones.

Watering regularly and looking after the plant will help keep the disease from reoccurring, Pruning as suggested will provide air circulation around the plant and prevent the fungus from taking hold in the first place.

Escallonia does not like dry winds or low winter temperatures. Prolong heavy rain or long dry spells of drought will result in the plant losing leaves,

If frosts have killed any young shoots, wait until mid-spring before pruning out as at this stage it will become clear to see where the dead areas are and where new growth begins.

Escallonia laevis ‘Golden Carpet’ in spring will have new growth that starts orange-red, turning yellow before green. On top of these leaves, pink flowers appear.

‘Red Dream’ grows up to 60cm high and is a low-growing spread with a spreading habit. It produces striking, rosy red flowers.

In this article, we have discussed how to grow the especially beautiful and regale shrub of Escallonia in containers. They are easy to grow, easy to look after and pests-free. They may need a sheltered space to protect them from harsh winters and cold winds. A plant where many cultivars and hybrids have been developed. Some of these are compact which makes them suitable to be grown in containers.

If you have any questions or comments that you wish to make on growing Escallonia in containers, please do so in the comment box below.